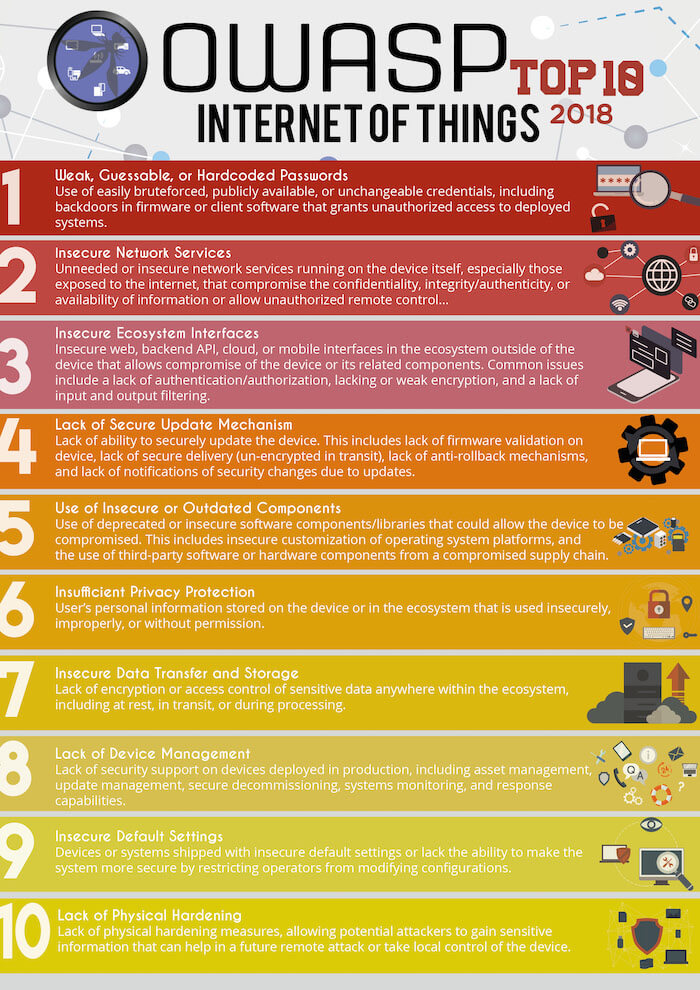 The increasing reliance on IoT devices presents its own security threat. In particular, there is an increased risk of financial breach. Hackers can access data from unencrypted devices. In addition to financial theft, IoT devices can be an entry point for hackers. In this article, we’ll look at some of the main security risks associated with IoT devices. We’ll also examine the ways in which these devices can be hacked to expose valuable information.

Many IoT devices are not encrypted, which makes the data transmitted by them very vulnerable to cyberattacks. In addition, most of these devices have no encryption, which makes updating the software very easy for malicious actors. To prevent this problem, organizations should connect IoT devices to encrypted networks. Because most IoT devices have default passwords, malicious actors can brute force or use dictionary attacks to gain access to the network. In California, Senate Bill 327 requires manufacturers to equip their devices with reasonable security features and program a unique password for each device. Then, organizations should implement password policies that are appropriate for the level of risk.

The security risks associated with IoT devices are significant. According to a recent report published by Zscaler, more than one million IoT devices have been attacked globally since 2015. In addition, the unit analyzed security incidents that affected enterprise IT, healthcare orgs, and IoT devices. The authors found that the most commonly exploited vulnerabilities were in the embedded credentials used by IoT devices.

Unfortunately, most IoT traffic is unencryptes. This is a huge security vulnerability, as unencrypted traffic is a prime target for a Man in the Middle attack. Using this vulnerability, attackers can capture data between connected devices and use it for malicious purposes, such as sending spam and DDoS attacks. Furthermore, 98% of all IoT traffic is unencrypted, leaving data on the network vulnerable to compromise. As the market for connected devices grows rapidly, enterprises tend to rush to purchase and deploy these devices without considering their security risks. Because of this, unencrypted traffic is vulnerable to attack, allowing attackers to steal data and compromise an enterprise network.

Cybercriminals often look at data traffic after compromising IoT devices, so it is vital that all data is encrypted. Unfortunately, 98% of IoT traffic is unencrypted, leaving personal information and data susceptible to hackers. Despite the security risks associated with unencrypted traffic, however, encryption is the most efficient method for ensuring data privacy. The most common method for encryption is using asymmetric key encryption (AES-256), which makes data unreadable for unauthorized users.

IoT devices can be hacked

Many IoT devices are vulnerable to hacking. Smart cameras, for instance, can give hackers access to sensitive information, such as health records. Smart toys, such as connected televisions and printers, can be vulnerable as well. These devices send data all the time, but sometimes it is not encrypted. A hacker can alter this data to his advantage. This means he can even take advantage of a system’s insecurity to access other parts of the network.

One of the main problems with IoT devices is that they’re easy to attack. Many of them are simple and lack many sophisticated features, making them easy targets for hackers. Even if your office coffee machine doesn’t send any data, it can be compromised. In addition, hackers can take control of the device’s functions. Because of this, a hacker could cause massive damage. For example, the attacker could use the coffee machine to launch a DDoS attack.

IoT devices are an entry point for hackers

IoT devices are Internet-connected computers that hackers are trying to take control of. Once compromised, they can perform Distributed Denial of Service attacks, attempt to hack into user accounts, spread malware, and perform other malicious actions against the organization’s systems. Because these devices process sensitive data and are often connected to cloud subscription services, they are ideal targets for hackers. In order to make your IoT devices an entry point for hackers, you should make sure your home security measures are up to par.

Although IoT technology is rapidly gaining popularity, the number of unsecured devices connected to the Internet has been increasing for years. Those devices, especially those with privileged roles, can be hacked and used to steal confidential information and hinder operations. Hackers can also use connected devices to form botnets, a collection of thousands of infected devices. These botnets can cause major damage to networks through DDoS attacks.

IoT devices are vulnerable to ransomware

Ransomware attacks on IoT devices have many characteristics in common with the more traditional forms of malware. Because they don’t have a display mechanism, attackers must get hold of a device’s email address or an app that controls it. This is especially problematic because IoT devices rarely store any valuable data locally. As a result, a ransomware attack on an IoT device will typically block the device from performing its core functionality, such as recording a feed.

In addition to affecting data, IoT devices can also be bricked. For example, one malware known as BrickerBot infected Linux-based routers. The malware then used the devices to perform distributed denial-of-service attacks and download additional malware. Another form of IoT malware known as Silex, which attacks IoT devices, exploits weak default credentials and attempts to log in to the device and run malicious commands, rendering it useless. Unlike other forms of malware, Silex doesn’t seem to have an agenda or a profit motive.