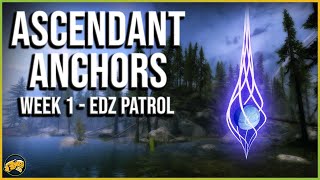 The Ascendant Ballast Patrol is a mission from Destiny 2 that requires you to collect the coveted anchors. The first Ascendant Ballast Anchor will be found in the EDZ. You must wait until Week 2 to complete this quest. In addition, it counts for the Seasonal Milestone that you have set for yourself in the Ascendant Anchors questline. Once you’ve collected all six of them, you can proceed to the second mission, the Ascendant Ballast.

The Ascendant Ballast Challenge is now fixed, though there are still some niggles. The problem with the Ascendant Ballast Challenge was that it didn’t track the Anchors properly. While this was frustrating, Bungie has fixed this bug and will fix this soon. It also fixed an issue that prevented players from completing the Tracing the Stars quest. In the meantime, the Anchors may not count until the second week.

Another bug that affects Ascendant players is a glitch in the Seasonal Challenge. It prevents players from advancing in the challenge. This guide explains the causes of the bug and how to solve it. Essentially, you will have to collect all Ascendant Anchors to advance. This bug will cause you to get stuck in a certain area. If you do this, you won’t get the Anchors you need to advance in the challenge.

Ascendant Anchors are purple collectibles that appear in the Shattered Realm and Patrol zones. They glow purple when they’re picked up and can be used to earn Parallax Trajectory and Seasonal Milestones. Ascendant Anchors were introduced during the Wayfinder’s Voyage questline. They can be found in Trostland as well. So, if you’re a new player, it’s time to start collecting Ascendant Anchors.

The Ascendant Anchor is located in a passageway between The Gulch and The Sludge. Use the Lantern to go through the barrier. This totem is a requirement for the Ley Line Rumors weekly challenge. You can also get it from a totem outside of the Mausoleum. Just make sure that you have the True Sight totem before using it so that you can activate it.