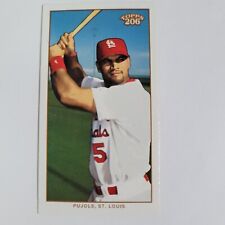 The 2002 Topps Albert Pujols card was issued with an incorrect back photo – a picture of Pujols’ brother Placido Polanco appeared on the card. Topps was unaware of this error until 2003, and it is unclear how many of the cards were corrected. The corresponding Opening Day and Chrome versions have the corrected back photo. However, the error was not corrected for the Limited Edition and HTA factory sets. The error was also not corrected on the Gold Border parallels, which were each numbered to 2002.